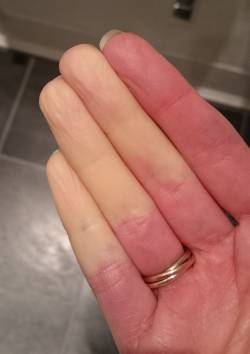 ONE MINUTE ONLINE TEST COULD HELP MILLIONS WHO DON’T

KNOW THEY HAVE RAYNAUD’S BUT SHOULD

February is Raynaud’s Awareness Month, and Scleroderma & Raynaud’s UK
(SRUK) – the UK’s only charity dedicated to improving the lives of people affected by Raynaud’s phenomenon – is inviting people who might be affected to take The Test (sruk.co.uk/testme) to get support and advice.

Raynaud’s is not life-threatening, but it can be extremely painful and debilitating and in some cases symptoms can indicate a more serious underlying condition. Almost half of people[i] have heard of Raynaud’s, but very few people can name the symptoms (just 5% in a recent survey[ii]). That’s why SRUK is asking people to take The Test online and #knowraynauds to better understand, and manage, their symptoms.

Many people with like Patients Bradley, who first noticed she had Raynaud’s when she was 14 years old, will battle with the condition their whole lives. Patients learnt strategies to cope with Raynaud’s and went on to be a global model and a dancer with Legs & Co, “When I was young, I was scared that I couldn’t carry on doing the things I wanted to do… but I’ve been really lucky in the support I’ve been given offer the years. I have had it nearly all my life and it hasn’t stopped me from reaching my goals”

So, what is Raynaud’s? Raynaud’s is a common, but little understood, condition which affects up to 10 million people in the UK (eight million women and two million men). It’s most likely to start in the 20’s and 30’s, and it affects blood circulation, causing some areas of the body, such as fingers and toes, to feel numb or freezing cold in response to changes in temperature. Everyday activities then become almost impossible, such as buttoning a coat, a trip down the frozen aisle of the supermarket or even turning the key in a front door. Heating in the home will often need to be turned up unusually high, and even air-conditioning in the summer can be extremely uncomfortable.

People with symptoms including cold fingers or toes, or skin colour changes in response to cold or stress, should take The Test. It helps people understand their symptoms and avoid painful episodes, it also explains which symptoms may indicate more serious illnesses.

Sue Farrington, SRUK Chief Executive said: “We know that despite a quarter of people saying that they had experienced symptoms, only 10% on average have visited their GP. This needs to change – Raynaud’s can be a minor but uncomfortable inconvenience, but for those more seriously affected it’s crucial that they seek medical treatment and support as early as possible. We hope with our online test people can self-manage the condition better, seek treatment where necessary but, above all, know that they are not alone.” 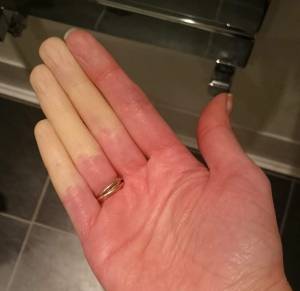 Who should take The Test?

If people are affected by any of the 5 symptoms below, they should take The Test at www.sruk.co.uk/testme

Other parts of the body can be affected by Raynaud’s including the ears, nose, lips, tongue and nipples. Symptoms can last for a few minutes to several hours.

Raynaud’s phenomenon is a common condition thought to affect up to ten million people in the UK. In people who have Raynaud’s, the small blood vessels in the extremities are over-sensitive to changes in temperature. This causes a Raynaud’s attack where the fingers sometimes change colour, but not always, from white, to blue, to red. A Raynaud’s attack can be a very uncomfortable, possibly painful, process. It can also make everyday tasks, like buttoning a jacket or unzipping a purse, very difficult.

Raynaud’s symptoms generally affect the fingers and toes, but all extremities can be involved, including the ears, nose and nipples.

Treatment from a GP

If your symptoms are very bad or getting worse, your GP may prescribe a medicine called nifedipine to help improve your circulation. Some people need to take nifedipine every day. Others only use it to prevent Raynaud’s – for example, during cold weather.

How serious is Raynaud’s?

There are two different types of Raynaud’s, Primary and Secondary. Primary is usually the less serious of the two types as the condition is mild and manageable whilst people experiencing secondary Raynaud’s will usually have more severe symptoms. Secondary Raynaud’s is caused by another condition, usually an autoimmune condition like scleroderma or lupus. Secondary Raynaud’s needs more investigation and more careful monitoring for complications like ulceration or sores. People who have noticed a change in their symptoms, are worried about their symptoms, if they have any other symptoms, or another health condition should book an appointment with their GP promptly.

SRUK is the UK’s only charity dedicated to improving the lives of people affected by Scleroderma and Raynaud’s. We’re dedicated to providing the best support and care to people with the conditions, while spearheading research in to new treatments and ultimately looking for a cure

For further information about our research findings contact info@sruk.co.uk, visit www.sruk.co.uk or call us on 020 3893 5998

[ii] Only 5% of people reported being able to name the Raynaud’s symptoms (SRUK survey with Censuswide, 2,023 UK respondents, Sept 2018)