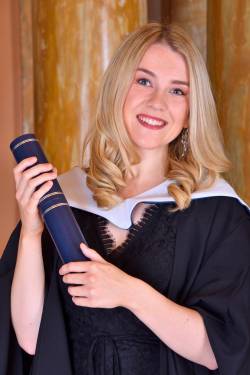 Rowan Nicolson, 23, was presented with the prestigious Canonbury Award for Academic Excellence (Top final year student) and the OSGO Healthcare Award for Clinical Audit. Canonbury and OSGO are two of the UK’s leading podiatry product specialists.

Rowan, who attended the Anderson High School in Lerwick, graduated from QMU with a first class BSc (Hons) Podiatry in July.

Commenting on her academic success and award from QMU, Rowan said: “I was absolutely delighted to have gained a first class degree and then being awarded with both academic prizes was just the icing on the cake. I still can’t believe it! I can’t thank the wonderful podiatry staff at QMU enough. Their constant guidance and support throughout the past four years has been integral to these achievements.

“I’ve truly loved my time studying podiatry at QMU. The lecturers are brilliant, ensuring that graduates are fully equipped with the skills and confidence to enter the workplace. I’d wholeheartedly recommend this course to all prospective students who are interested in a career in healthcare”.

Since graduating from QMU, Rowan has already secured a graduate position with Podiatry Shetland in Lerwick, where she is providing general and cosmetic care.

Podiatry Shetland is run by fellow QMU podiatry graduate, Bruce McCulloch, who set up the business in 2010. Bruce has a first class honours and Master’s degree in podiatry from QMU.  From August, Podiatry Shetland will be moving to its new premises in Gulberwick.