Dermal Fillers for the Feet – a New Old Treatment 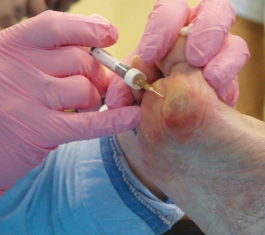 It is frequently said (or it was at least by my dear old Granny) that there is nothing new under the Sun. Whilst the discoverers of the Higgs Boson may take issue with Granny’s statement there is, I believe, quite a bit of truth in it. Even in the case of injecting some of the substances now being used to augment dystrophic plantar fibro-fatty padding, which one could be forgiven for believing to represent a brand new modality now being introduced to a suffering public.

When I was first introduced to the delights of sticking needles into people in return for payment (to seek to deal with tissue injuries may I add, not to extort payment of unpaid fees), more years ago than I care to remember, I keenly believed that injection and similar regenerative therapies were all cutting edge stuff, at the forefront of modern podiatric science. However, when I first started to teach these said therapies to colleagues as CPD some 13 years ago or so, it became evident as I researched the necessary background that these ‘new’ therapies drew on older therapies that stretched back decades – and even in certain cases regarding their underpinning principles to ancient Greece.

In order to discuss the action of fillers later, to establish a background let us first consider a simple connective tissue injury, say the medial ligament of the talocrural joint – a frequently encountered injury[1],[2]. Now, ligaments are, as we well know in podiatry, some of the most challenging injuries to deal with. From the perspective of appropriate injection therapies we may consider using a parenteral corticosteroid such as depo-medrone (POM-A exemption) or kenalog (POM requiring independent prescription) with the intent of dealing with this ‘inflamed’ site of injury.

Alas, more research will show that often there is little ‘true’ inflammation in such injuries, with the pain frequently being caused by nerve fibres that have been stretched by the injury to the ligament or tendon that they run through[3],[4]. From the foregoing we can reasonably hypothesise that what is frequently required is not an anti-inflammatory agent but instead something to actually drive healing forward, essentially initiate a healing response in the host tissue.

In looking for an agent to provoke a host response, we can then find that there is much evidence that injection treatments exist which are believed to provoke healing in cases of traumatic tissue injury where no specific pro-inflammatory mediators are present in any quantity (i.e. no or few prostaglandins, histamines, bradykinins, leukotrienes etc etc). A good example is ‘prolotherapy’, a more than 50 year old modality[5] which seeks to use parenteral agents to stimulate a host healing response in the injured site by using a solution of glucose mixed with a local anaesthetic, to ‘stress’ the fibroblasts present in the injured site and cause them to respond by producing the collagen that is a major element in tissue repair, therefore restoring structure and function to the ligament and eliminating the stretching of the nerve endings, so reducing pain[6] . A little more research then reveals that a similar procedure for hernia repair was patent in the 1930’s[7]

Then however, even more research reveals that this idea of initiating a host response for tissue repair can be traced back to the Greek Physician Hippocrates[8]. Admittedly, good old Hippocrates did not have a hypodermic syringe, nonetheless, when confronted with damaged ligament laxity in the throwing shoulders of his favourite athletes he sought to repair them by provoking a host response. In his case he used a very slim red hot iron (a Kauterion – see the root of cautery?) which he thrust repeatedly through the damaged ligaments to provoke scar tissue formation and which he describes in detail in section IX of his works on the Articulations[9], first published around 400AD.

At this stage gentle reader, you may well be wondering what earthly relevance this has to injecting agents into the plantar foot. Well, a short consideration will reveal that the substances currently used are essentially liquids or gels (either Newtonian[10] or non-Newtonian[11] fluids) – I have personally forswore the Kauterion. The concept sometimes advanced that injected substances somehow stay in place of themselves and in some fashion ‘cushion’ the foot is hard to give credence to because the pressures which develop in the normally healthy foot can be substantial, and in the case of dystrophic or otherwise pathological tissue can be dramatic – typical ‘normal’ pressures are 80-100 kPa standing, 200-500 kPa walking, up to 1500 kPa in some sports and in diabetic plantar tissue pathologies sustained pressures as high as 3000 kPa[12]

Whilst admitting, without getting too enmeshed in fluid mechanics, that there may be some dilatant action going on (think trying to stir a thick paste of cornflour and water – it gets stiffer) such pressures would almost invariably in most cases extravasate the substance injected into the surrounding less compressed tissue. Indeed, if such was not the case and if the injectate became a semi-solid siting in an area of already excessive loading, it could well compress underlying blood vessels with the possibility of provoking tissue necrosis. Therefore it is reasonable to suppose that to a great extent some other mechanism of action is at work in the plantar tissue. Hence it is suggested that a host response is a likely mechanism of action.

It is at this point that we return to the title of this short jotting. Dermal fillers are not a new therapy, they have certainly been around in podiatry for more than fifty years and for non-podiatric applications since very shortly after the second world war. During that period of time the agents used have evolved and varied but the basic principle of parenteral administration by hypodermic has remained constant.

In 1964 the redoubtable American Podiatric Physician, Dr Sol Balkin DPM started to record his use of injectable silicone in the foot to “address the loss of plantar fat” and he published his 41 year clinical and histological study in 2005.[13] As Sol Balkin makes plain in his publication, he himself drew on the earlier work of Harvey D. Kagan MD who in the early 1960’s lectured upon the use of injectable silicone for breast augmentation. In turn Dr Kagan drew on the work of the Japanese physician Dr Rin Sakurai[14] who claimed to have started injecting breasts in 1946. Returning to the foot, Dr Balkin proposed that the injected silicone provoked a “banal and stable fibrous tissue formation” as a result of a “human histologic host response”.

Since Sol Balkin’s time there have been several other uses of silicone as a podiatric filler in both the USA and the UK. Notably in 1996, when the California based company McGahn medical corporation sponsored a double-blind placebo controlled study of silicone injections in the feet of diabetic patients at the Manchester (UK) Royal Infirmary under the oversight of Professor Andrew J.M Boulton MD with good outcomes[15]

Since then the story of fillers in the feet has been varied. Silicone alternately fell into and out of favour, some of the more sensational media suggested it migrated dramatically around the body, it became hard to source, expensive at first before reducing in price and then supplies becoming essentially unobtainable, in the UK at least. However, the present author has certainly used silicone with good effect some years ago when it was available without any adverse effect. Other substances have been tried by various users, autologous fat, bovine collagen, avian collagen etc but most have not commanded a widespread report of success, and again, none of these are used by the present author.

Nowadays the agents of choice, and certainly those used and taught by the author are based on Hyaluronic Acid (HA). This substance is naturally present in substantial areas of the human organism so one is not introducing anything that is not physiologically present. Other fillers can be used, notably Poly-l-Lactic Acid (PLLA), which is a bio-compatible polymer so not physiologically present. Both HA and PLLA are widely used as facial volumisers to fill out wrinkles and both have decent safety records. Their mechanisms of action are similar, inasmuch as they initiate a host response that provokes the formation of collagen and in the case of HA also attracts interstitial tissue fluid to the area injected (HA is highly hydrophilic in its purified form). There have in some studies been suggestions that PLLA, when used cosmetically, has over-stimulated neocollagenisis in facial areas and one study[16] reported “The mechanism of action of poly-L-lactic acid requires techniques and patient management as incorrect injection technique can cause device-related adverse events by overstimulation of the fibroblasts” but in the feet a little ‘over volumisation’ may, if managed appropriately be less contentious. In the case of HA this has been used for years cosmetically, indeed one manufacturer some years ago celebrated their ‘10 Millionth’ treatment and are now up to their 30 millionth treatment (see: www.restylaneusa.com) and it has a most impressive safety record. HA is the authors agent of choice due to its safety record and it is this that is used in the CPD courses provided by the Institute of Chiropodists and Podiatrists on which the author and his colleagues teach.

Post treatment care and counselling need to be attended to carefully for good outcomes, particularly in the area of offloading padding, and in order to effectively administer the treatment effective analgesia is required. In the matter of analgesia, where suitably qualified podiatrists require ‘brushing up’ on their tibial and sural blocks, this is part of the course and is of itself a useful revision in these most useful and under-used procedures which can make so many procedures in the foot pain-free. 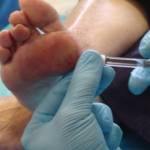 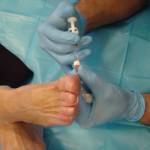 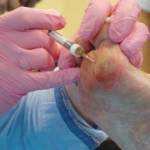 [7] Rice CO., Aratson., Histologic changes in the tissue of man and animals following the injection of irritating solutions intended for the cure of hernia’s. Ill Med. J. 70: 271, Sept. 1936

[9] “It deserves to be known how a shoulder which is subject to frequent dislocations should be treated…The cautery should be applied thus: taking hold with the hands of the skin at the armpit, it is to be drawn into the line, in which the head of the humerus is dislocated; and then the skin thus drawn aside is to be burnt to the opposite side. The burnings should be performed with irons, which are not thick nor much rounded, but of an oblong form (for thus they pass the more readily through), and they are to be pushed forward with the hand; the cauteries should be red-hot, that they may pass through as quickly as possible; for such as are thick pass through slowly, and occasion eschars of a greater breadth than convenient, and there is danger that the cicatrices may break into one another; which, although nothing very bad, is most unseemly, or awkward” Hippocrates. Works – on the articulations; section XI. Francis Adams (trans) London 1849

[10] A Newtonian fluids viscosity remains constant, no matter the amount of shear applied for a constant temperature. These fluids have a linear relationship between viscosity and shear stress.